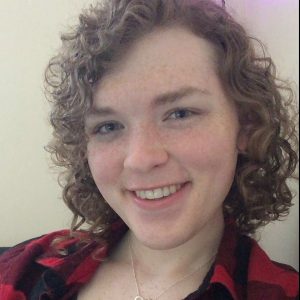 I loved working with Joy! She was recommended to me by my therapist near the beginning of my transition, and I am so glad I reached out to start working on my voice! Our sessions were very relaxed, and I always felt comfortable around her, even though my voice was an extremely sensitive topic for me back then. She definitely knows her stuff, and if you’re looking to safely and comfortably feminize your voice, I would highly recommend her!

From the first moments my voice started dropping, I absolutely despised it. At first I hated it because it wasn’t deep enough; I never felt like a “real man” while speaking. And even when it did get pretty low, I still couldn’t ever stand hearing myself speak; I actively avoided doing anything where I would have to use my voice, and I basically resigned myself to just being the quiet kid who barely said a word all throughout high school and early college.

Later on, after I realized I was trans, I started hating my voice for not being feminine enough. I gave the tips I could find online a shot, but nothing I tried really seemed to help. That is, until I reached out to Joy. She was absolutely phenomenal, and funnily enough, she had previously worked as a speech pathologist at the same ENT office I was working at last year, so we hit it off right away! But yeah, she played a massive role in transforming my voice from something that gave me constant dysphoria into one of my favorite personal qualities nowadays!

I’ve always been very musically inclined, which actually made a lot of the exercises and practices quite easy for me, especially after doing them for a few weeks. I suppose I am quite lucky in that regard; we only met four or so times before Joy felt confident I had all the tools in my belt to fully feminize my voice. After that, it was pretty much all up to me to put in the time and effort practicing. By the start of the next school semester, I officially had myself a fully feminine voice that I love and cherish so very much! I even sing femininely now!! As I write this, it’s been about 6 months since coming out to the world, and I haven’t been misgendered once 🙂